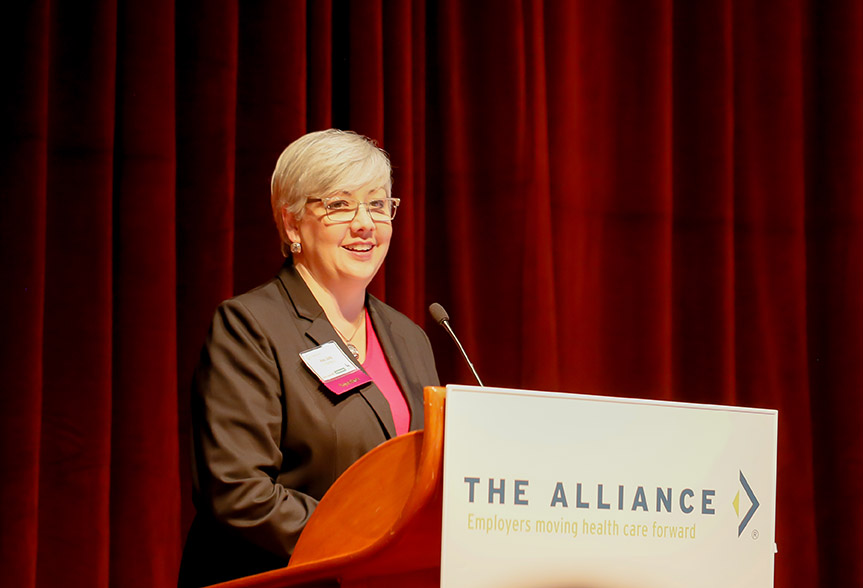 What is the likely impact of the Drug Price Blueprint? American Patients First, the Trump Administration’s drug price blueprint to lower costs, contains provisions with the potential for a significant impact on the health care marketplace, according to Alex Jung, managing director in the Parthenon-EY practice of Ernst & Young LLP.

Jung said American Patients First reflects an understanding of how money flows in the health care marketplace. She noted that Alex Azar, a former pharmaceutical company executive who is now the U.S. Secretary of Health and Human Services (HHS), has been both lauded and criticized for proposing changes to the drug market.

Jung said consumers who shared cost information on social media were one of the drivers that brought visibility around drug price variability to the forefront of the discussion at the federal level.

American Patients First is “very focused on the incentives in the system,” Jung said. It offers more than 50 regulatory and legislative measures aimed at reducing drug costs for consumers.

These measures are organized in four sections:

While it’s tempting to blame pharmaceutical companies for marketplace woes, that’s unfair to them in a system where these companies must spend $2 billion to $2.5 billion to research and develop a single new drug. Yet of every 10 new drugs developed, only one may make it to market.

The cost of research and development for successful and unsuccessful drugs alike is passed along only to U.S. consumers, since other markets worldwide refuse to help pay for that cost. Pharmaceutical companies are typically the only backers for the development of new medications so “demonizing” the companies and their researchers will result in less development work.

“We have no choice to pay for it unless we choose to create a public agency to do so,” Jung said.

She added that the U.S. needs a constructive dialogue about which diseases to prioritize for additional research, so research investments go to identified needs such as new antibiotics as well as to creating highly profitable specialty drugs.

“Demonizing” pharmaceutical companies could also prompt them to go elsewhere. China and India are changing intellectual property rules to persuade drug companies to make their products there, for example.

Alliance members have adopted a new health policy resolution that calls for a variety of reforms to drug pricing, marketing and pharmacy benefit design in the name of ensuring appropriate care at an affordable cost.  Congress and the administration are working on these issues, but employer voices will be needed to make sure that both Congress and the administration follow through on the work they have started.  You can help by being ready to reach out to members of Congress if it appears that Congress stalls in its efforts to pass aspects of American Patients First.

Self-funded employers have a “fiduciary duty“ to act in the best interest of health plan participants. That should prompt them to look carefully at whether drug rebates are collected and paid appropriately and whether their plan’s drug formularies protect enrollee’s best interests. A bill requiring disclosure of rebates that are collected and paid is currently making its way through Congress but is currently focused on Medicare. Employers have a long history of copying what Medicare does in other areas, like determining what to cover, and will likely evaluate this as well.

All of these efforts are about shared responsibility.  Employers have asked patients to be accountable and share in the costs of their care but there is a duty for them to act in the best interest of their health plan beneficiaries and not disadvantage the sickest Americans.

Jung urged employers to work together in coalitions, be a voice for their employees’ needs, and make sure their PBMs and other vendors are acting in their best interests.

Get a Specialty Rx Toolkit

The Midwest Business Group on Health’s (MBGH‘s) National Employer Initiative on Specialty Drugs is an employer-driven research project that offers a Specialty Rx Toolkit to provide resources for employers.  View the slide presentation from Cheryl Larson, MBGH president and the leader of the specialty drug initiative.

Explore a Different Kind of PBM

National CooperativeRx is a not-for-profit prescription drug purchasing cooperative that delivers deep discounts to employers who are member-owners.

Specialty Drugs, Biosimilars and Your Benefit Plan - A Call to Action For Employers

Why do Pharmacy Benefits Costs Continue to Rise?