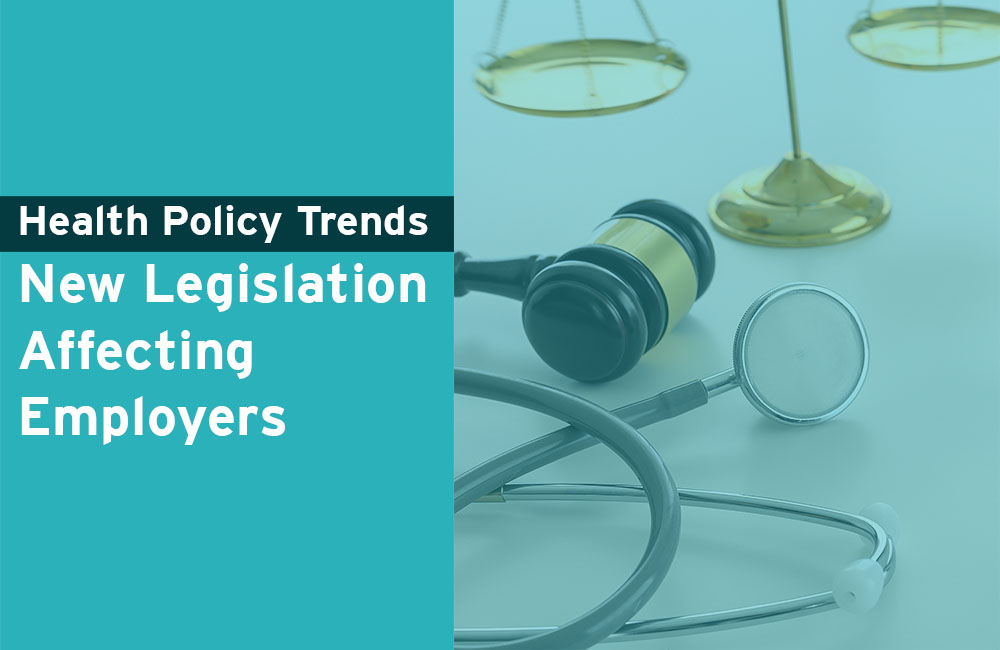 It’s peak legislative season, which means a lot of proposed bills are being reviewed and discussed at both the state and federal levels. We aim to keep our employers in the loop when it comes to trending health policy topics and legislative proposals. As of the time of this writing, here’s some healthcare-related bills being proposed, discussed, or passed. (Please subscribe to our Health Policy Insights for future updates on these issues.)

At the Federal Level

This broad and far-reaching bill has several non-health implications for employers, but as far as the scope of The Alliance Health Policy function, the provisions related to drug pricing are most relevant, and somewhat concerning. The bill passed the House but does not have the votes to pass the Senate and has been declared “dead.” Certain provisions may be moved to another package, including:

This legislation that attempts to address anticompetitive behavior in health care includes several provisions. Among them is a provision that ensures employer plans are not prevented from steering employees to certain providers. Unfortunately, we’ve identified gaps in the bill that could lead to even bigger anti-competitive issues, and The Alliance has shared these concerns with Senator Tammy Baldwin, who proposed the Bill. It has now been introduced and referred to the Senate HELP Committee.

Would require Medicare and private plans to cap out-of-pocket costs for covered insulin at $35 per month, however, the bill does nothing to address the cost of insulin charged by manufacturers. We are advocating for cost control measures that would apply to both consumers and employers/health plans. The bill is now with the Senate Finance Committee, and the Senate leader has declared it a high priority for passage.

Extends coverage mandate for no-cost COVID-19 testing until December 31, 2023 and applies the No Surprises Act arbitration process to tests received out of network. This is meant to address price gouging for tests by out-of-network providers, although increasing disputes that require arbitration may not be a desired outcome for employers. The Bill’s status now remains with the House Committee on Energy and Commerce.

There are six lawsuits filed challenging the No Surprises Act rules issued by the Department of Health and Human Services and the Department of Labor. Specifically, the lawsuits are challenging the rule’s direction that require arbiters to consider the Qualified Payment Amount (QPA) as the dominant factor when settling payment disputes. Since the No Surprises Act took effect on 1/1/22, the lawsuits create uncertainty for health plans. If the courts find that arbiters cannot rely on the QPA as the dominant factor, it is likely to lead to more disputes and higher settlement amounts.

One case has been decided and found the rules unlawful. The departments will re-issue the rules to comply with the court ruling until the decision is re-introduced or stayed by a higher court.

At the State Level

This bill would forbid businesses from requiring individuals to show proof of a COVID-19 vaccination to receive services. This bill is expected to advance to the Governor’s desk, where it is expected to be vetoed.

Would require employers that require proof of a COVID-19 vaccine or testing as a condition of employment to accept documentation demonstrating natural immunity in lieu of proof of vaccination or testing. This bill is expected to advance to the Governor’s desk, where it is expected to be vetoed.

Under current law, a person who wishes to practice professional nursing must be licensed by the Board of Nursing as a registered nurse (RN). This bill creates an additional system of licensure for advanced practice registered nurses (APRNs), modernizing and expanding their scope of work and enabling certain experienced APRNs to practice without physician supervision.

Although physician groups are opposed, the legislation could increase the availability of medical practitioners, particularly in rural areas, and has the potential to broaden the availability of providers to staff on-site and near-site Direct Primary Care clinics. The bill has passed both houses and has been sent to the Governor for consideration.

Pharma-sponsored legislation in Wisconsin would require self-funded municipal plans and PBMs to count the value of drug coupons offered by drug manufacturers toward deductibles and maximum out-of-pocket amounts, ensuring that anyone using drug coupons will satisfy cost-sharing requirements faster. Since the bill would apply to PBMs, it is uncertain as to whether the bill would be preempted by ERISA for non-municipal self-funded plans. A public hearing was held in the WI Assembly Health Committee, but no further action was taken.

In Illinois, the Managed Care Reform and Patient Rights Act already requires health plans to count third-party payments, including drug coupons, toward all cost-sharing requirements. However, the law contradicts federal high-deductible health plans (HDHP) regulations because by counting these coupon amounts towards the deductible, the discount is considered disqualifying “first dollar coverage.” HB 4433 addresses this issue by exempting HDHPs from the drug coupon requirement.

Would enable health care providers to offer discounts for promptly paid bills. However, the bill is drafted so broadly that it could be used by providers to undermine plan designs. “Prompt” is not defined, and there are no limits on the discounts, nor is there any reporting to plans once a discount is provided, which means providers could use this legislation to incentivize people to seek care. A public hearing was held in both houses, but no further action was taken.

Would prohibit employers from “white-bagging,” or sourcing clinician-administered drugs from less expensive pharmacies other than hospital owned pharmacies. These bills, introduced in both Illinois and Wisconsin, essentially force PBMs to purchase these medications from hospital pharmacies where markups average 200-400% or more. Since the Wisconsin bills would apply to PBMs and entities involved in health benefits, it is likely to impact self-funded plans. If passed, it would remove any incentive for hospitals to limit price increases on clinician-administered medications.

The Alliance testified to State legislators against the Wisconsin bills, showcasing the adverse impact it would have on self-funded employers.

“Passing AB718/SB 753 will limit market competition, making important drugs even less affordable,” Cheryl DeMars, CEO of The Alliance said. “This is not a step that Wisconsin lawmakers should take with more and more life changing and life-saving medications coming to the market. We need to find ways to help employers afford these medications.”

Clarifies that physicians who practice independently and charge a monthly subscription fee for services will not be regulated as insurance. This bill passed the Senate and could lead to an increased number of independent physicians practicing in the state.

A hearing was schedule on this bill which gives the Illinois Department of Insurance the authority to operate the Illinois Health Benefits Exchange. Currently, the Illinois exchange relies heavily on support from the federal government, but this legislation would give the state the authority to run its own exchange. The legislation would be applicable primarily for individual insurance policies which may be of interest for employers looking for options for workers that do not qualify for their group health benefit plan.

What Employers Can Do

The Alliance believes every employer has a meaningful story to tell. We can help you find, develop, and present yours to key lawmakers. If you’re interested in telling your story to affect legislative change, please contact me.

Similarly, our Health Policy Committee discusses various policy initiatives and helps The Alliance arrive at positions to take with lawmakers. Participation on the Committee is open to all Alliance employer-members. No prior experience or qualifications are necessary to join – you simply need a desire to learn and affect change in health care. Just fill out the registration form by clicking Learn More on this page!

Last but not least, consider attending one of our events. The Alliance periodically hosts in-person events and webinars to educate employer-members and their consultants on important policy, regulatory changes, and compliance issues.

Our next event is our 2022 Spring Symposium, which will focus on how employers can use health care data to improve their health plan decision-making. It will host several expert speakers you won’t want to miss!

Tags:
Legislation
News You Can Use
Categories:
Health Policy