How can we ‘open up the health care world?’

“Everyone wants to know how we can open up the health care world,” Binder told the audience at The Alliance Annual Seminar on “Aiming for Impact” held May 12 at Monona Terrace, Madison, Wis.

The current political landscape favors the movement toward more transparency in health care, according to Leah Binder, CEO of the Leapfrog Group.

The Leapfrog Group is a national organization based in Washington, DC, that represents employer purchasers of health care who demand improvements in the safety of the nation’s hospitals.

Binder conducted a quick quiz, asking the audience which group spent the most money on U.S. health care in 2014. Almost everyone in the room voted for one of four choices: Medicare and the military, which it was later revealed funded 26 percent of 2014 health care; private businesses, which funded 21 percent; Medicaid, 18 percent; or health plans, which funded 7 percent.

Almost no one voted for the “other” category, which represented the 28 percent that consumers spent on premiums and out-of-pocket costs in 2014, making them the biggest purchaser.

“There’s no other market where 28 percent of that market is treated as virtually irrelevant,” Binder pointed out. In the coming years, she predicted that dynamic will change as consumers are energized by health plan requirements for greater out-of-pocket payments. Led by the Millennial Generation, consumers will come to demand the ability to shop for health care on their smartphones, just as they shop for everything else.

Binder urged employers to add their energy to consumers’ push for greater price transparency, since combined the two groups make up almost half of all U.S. health care spending.

“The power of this movement toward better care at a better price has become very dramatic,” Binder said. “And we’ve got to add momentum to that, because we’ve never had an opportunity like this in history.”

Binder noted that quality rating groups have become more aggressive in getting their quality measures out to the public through venues like Yelp and ProPublica.

“Instead of paying for care blindly, we pay for care we want and need and shop around for it,” Binder said.

The premier payer starting to purchase health care this way is the federal government’s Centers for Medicare and Medicaid services (CMS). She also cited Geisinger Health Systems’ work to create bundled payments that cover all segments of a single episode of care. Yet a Journal for the American Medical Association (JAMA) study showed most hospitals are still struggling to answer basic price questions from consumers and other payers.

“The movement toward value is very powerful, and health care is completely unprepared for this,” Binder said.

Nationally, a variety of ratings systems rate different elements of the health care world to achieve different goals. Leapfrog is the only reviewer that focuses solely on safety.

Some critics claim these varied efforts confuse consumers. Binder said surveys show the opposite is true – consumers understand that different types of reviews exist, just as they know that different ratings systems for movies and cars will have different results.

But Binder added that too many existing health care rating systems are difficult to understand, rate everyone as average or fail to hone in on measures that matter to people. Binder said the federal government’s HospitalCompare.gov site is an example, with 90 percent of hospitals appearing at the “national average” for their death rate from stroke.

“I would strongly urge you not to go to any hospitals that are below average because it takes a lot to get there,” Binder said dryly.

Newer rating systems reflect purchasers’ expectations that ratings should be unbiased, reflect widespread variation in quality and allow people to seek information that is relevant to their needs.

Leapfrog’s ratings meet all three standards. Leapfrog asks health systems and hospitals to complete the voluntary Leapfrog Hospital Survey for each location where they provide care. The survey provides information about safety in five areas:

Purchasers are finding ways to tie payment to Leapfrog data to encourage greater safety. In Maine, for example, purchasers waive the $250 deductible at hospitals that meet Leapfrog quality standards.

Leapfrog also produces Hospital Safety Scores, which use public measures to provide grades even in cases where hospitals fail to complete the voluntary survey.

“We don’t see why transparency should be voluntary when we’re spending so much money,” Binder said. The grades of “A” to “F” are available on The Alliance Find a Doctor website. 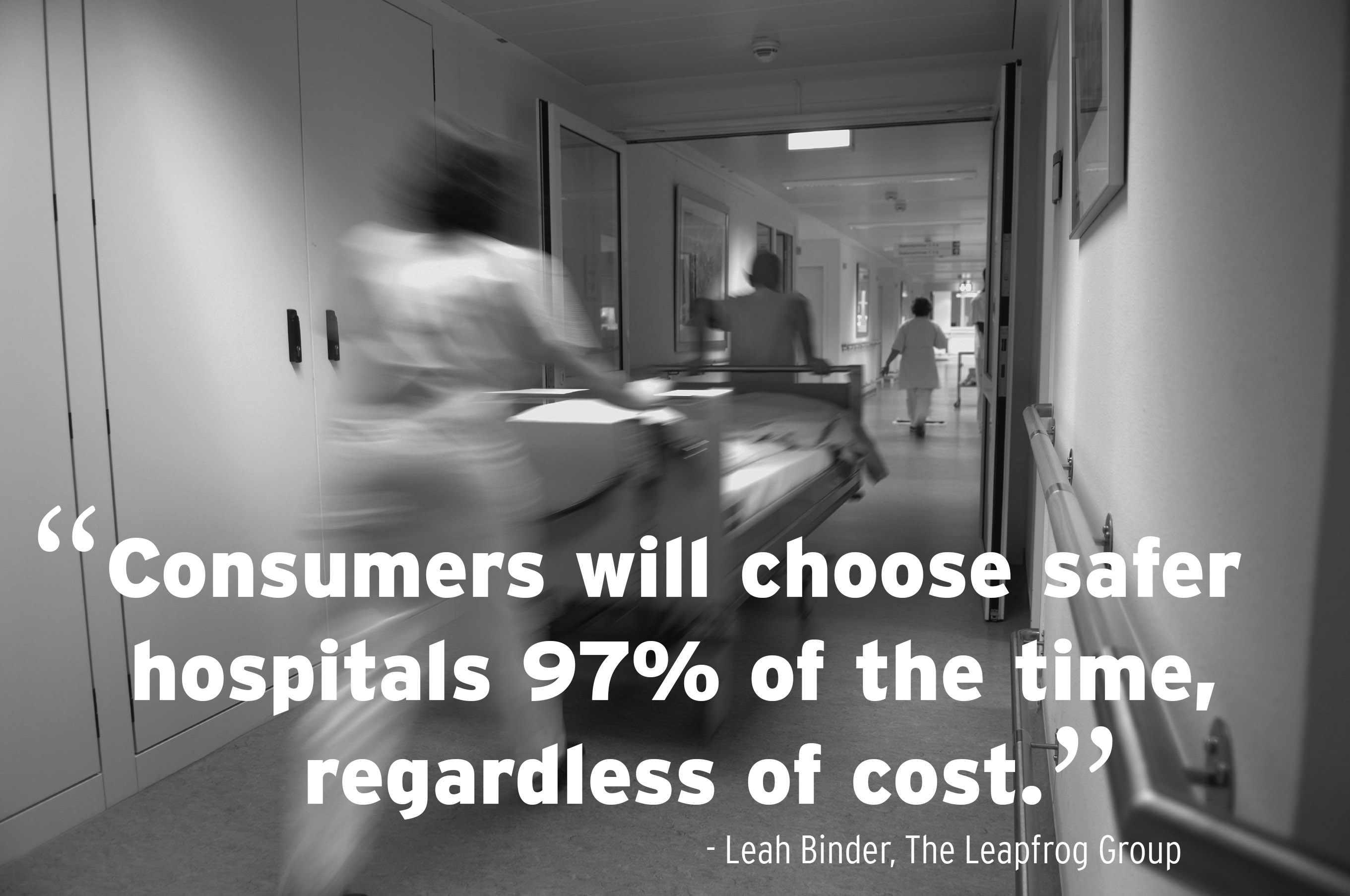 “Consumers will choose safer hospitals 97 percent of the time, regardless of cost,” Binder said.

Patient safety issues kill 250,000 people a year, a population that is equivalent to the city of Madison. These issues also significantly increase the cost of health care benefits.

“How many good jobs weren’t created because these employers had to pay for surgical site infections?” Binder asked.

Yet employers and other groups have proven that concerted efforts to improve safety can lead to significant, lifesaving progress. An example is the nationwide effort to reduce early elective deliveries, which represent births that are induced or done by cesarean section after 37 weeks of pregnancy but before 39 weeks. Early elective deliveries are linked to a wide range of health problems for the infant.

Leapfrog reporting helped “galvanize” the efforts of many different groups and individuals that worked to reduce the rate of early elective deliveries from a national average of 17 percent in 2010 to 2.8 percent today.

“That achievement means hundreds of thousands of babies did not end up in the Neonatal Intensive Care Unit (NICU) in the U.S.,” Binder said. Employers can help Leapfrog use the transparency movement to have the same impact in other areas.