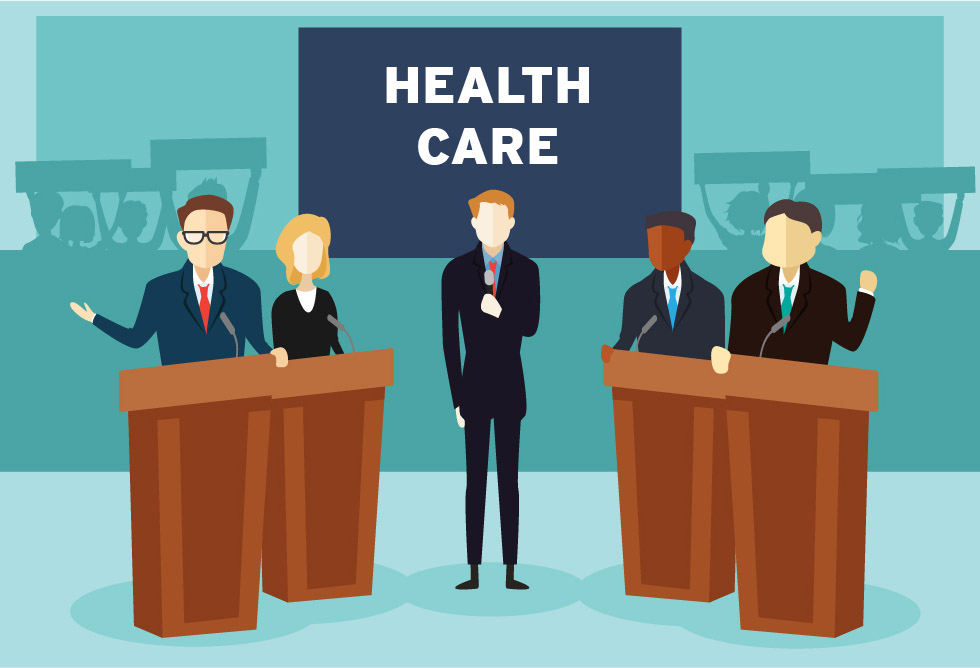 Who Stands for What? Breaking Down the Democratic Presidential Candidates’ Health Care Proposals

Health care is already looming large as an issue in the upcoming 2020 presidential election. The broad field of Democratic presidential candidates is advancing a full range of policy proposals, from single-payer to a public option to public-private hybrids. The candidates have also advanced specific ideas to address the cost of prescription drugs. The divergence in the candidates’ views was on full display during the fourth Democratic debate in Ohio a few weeks ago. In this post, I outline the contours of the health care debate among the leading Democratic candidates. In a future blog post, my colleague Beth Cubriel will describe President Trump’s position on health care reform, along with other Republicans.

Based on a recent average of national polls, former Vice President Joe Biden, Senator Elizabeth Warren, Senator Bernie Sanders, Mayor Pete Buttigieg, and Senator Kamala Harris respectively lead the pack. All other Democratic presidential candidates are polling at two percent or less. This analysis focuses on the health care policies being advanced by this group of frontrunners.

Vice President Biden’s plan would offer a public insurance option to anyone and would also expand Obamacare subsidies. Mayor Buttigieg describes his public option plan as “Medicare for all who want it,” and has said that it could create a “glide path toward Medicare for All.” Recently, Buttigieg announced he would pay for his plan by returning to a corporate tax rate of 35% and allowing Medicare to negotiate drug prices.

Medicare for All / Single Payer

Medicare for All would essentially do away with private health insurance in its current form, and health care costs would be covered by a single public insurance system, while the health care delivery system would remain private. Senator Sanders is credited with bringing this proposed approach into the mainstream of Democratic debate. He has sponsored several pieces of legislation that would authorize Medicare for All, and his 2016 presidential run helped to galvanize broader public support for this idea. The plan is also endorsed by Senator Warren, who is a co-sponsor of the bill.

One of the leading criticisms of Medicare for All is the cost of this approach. More precisely, opponents object to the need to transfer funds that are currently spent by private employers and health care consumers in the form of premium payments and cost-sharing over to the government to pay for care received under a Medicare for All plan. Cost estimates vary, but a recent report by the Urban Institute found that it would cost $34 trillion over ten years. Sanders acknowledges that government spending will increase, and taxes will likely go up for the middle class. Still, he argues that the average American will pay less for their health care than they would under the current system of private insurance. Senator Warren has been reluctant to acknowledge the need for a tax increase to finance Medicare for All, despite being directly asked in the September and October debates. She has emphasized that costs will go down, and recently announced her intent to put out a plan that specifically addresses the costs and financing of Medicare for All.

Senator Harris calls her plan Medicare for All, though it has fundamental differences from the legislation supported by Senators Sanders and Warren. Harris’ plan resembles the current Medicare Advantage system in that individuals could enroll in government Medicare plans or purchase privately run Medicare plans. Senator Sanders has criticized the Harris proposal for falling short of the “real” Medicare for All. The Biden campaign has also argued that Senator Harris’s plan will increase taxes for the middle class.

Another critical aspect of the candidates’ approach to health care has been their strategies to tackle the rising cost of prescription drugs. Each of the candidates mentioned above supports enabling Medicare to negotiate with pharmaceutical companies as a way to control drug prices and costs to consumers. Additionally, each of the top candidates supports permitting the importation of drugs from Canada and other countries, which are often less expensive.

How have self-funded employers and other groups responded to these proposals?

National Business Group on Health (NBGH) Public Policy Vice President Steve Wojcik has expressed concern that current proposals to expand public coverage will control costs by cutting provider rates, which could impact access for patients. He has argued for transforming care delivery to save costs. Insurance company CEOs have spoken out publicly against the Democratic proposals while also advocating for private-sector innovation and cost-cutting.

Hospitals are arguing that cuts to current reimbursement rates will force them to reduce services or close their doors. In fact, insurance and hospital lobbyists have created the Partnership for America’s Health Care Future, an alliance aimed at preventing both expanding Medicare and Medicare for All.

In a similar vein, the United States Chamber of Commerce formally submitted a letter to members of the U.S. Senate strongly opposing Medicare for All and Medicare buy-in proposals.

Where do we go from here?

While some of the proposals being advanced by the leading Democratic presidential candidates would be a substantial change in the way most working-age Americans get their health care coverage, nearly 75% of all Americans, across political affiliations, express support for “the federal government doing more to help provide health insurance for more Americans.” As far as solutions, nearly 75% of Americans express support for a public option or “optional” Medicare for All, while just over 50% support Medicare for All.

Polling data also demonstrates a high degree of confusion about what each of these changes means and how it would affect individuals and their families.

Expect to hear more, not less, about health care from Democratic candidates and President Trump as the campaign season moves into even higher gear in early 2020. The Alliance will continue to track the candidates’ positions so that our members can stay informed.

When it Comes to Surprise Medical Bills, Congress Should Side with Consumers

Effectively Engaging Your Member of Congress

John was an associate with Michael Best Strategies and works closely with clients on government relations, strategy development, stakeholder engagement, and best practice analyses. John gained experience as an intern with Michael Best Strategies, providing assistance and research to the team regarding public policy strategy, lobbying, shared value consulting, and public relations. John is a graduate of the La Follette School of Public Affairs.