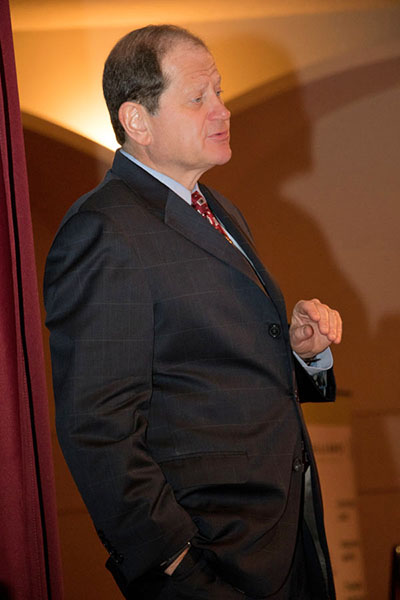 Would Shakespeare Call American Health Policy a Tragedy or Comedy?

It’s too soon to know whether the Affordable Care Act (ACA) and its 40 percent excise tax will be a comedy or a tragedy for U.S. employers.

James A. Klein, president of the American Benefits Council, took a “Shakespearean” look at health policy as part of The Alliance Annual Meeting focus on “The Role of Employers, The Excise Tax and What Lies Ahead” on Oct. 27 at Monona Terrace.

The Stage is Set

While American health policy offers elements of both comedy and tragedy, Klein hinted that it’s the type of material that would have given William Shakespeare plenty to write about.

The dynamics of American politics set the stage for drama. While Republicans make up the majority of both the U.S. House and the Senate, Klein noted that Republicans’ recent difficulties in selecting the next Speaker of the House show there is a distinct difference between “majority” and “control.”

Klein pointed out that Republicans also face the possibility of losing their Senate majority in the 2016 election, when Republicans must defend 24 seats while Democrats need only defend 10.

The ACA’s 40 percent excise tax, which Klein referred to by its nickname of the “Cadillac tax,”&#160; is a non-deductible tax of 40 percent of the value of employer-sponsored health coverage that exceeds certain benefit thresholds – initially, $10,200 for self-only coverage and $27,500 for family coverage in 2018.

Klein asked employers to indicate by raising their hands whether they plan to make changes to their health plans based on avoiding the Cadillac tax. Their response roughly mirrored the one-third of employers who have increased employee out-of-pocket costs in 2015, based on an Aon Hewitt study.

The excise tax was designed to help pay the cost of ACA provisions while encouraging health plan changes that policymakers believe would reduce health care costs. The Congressional Budget Office (CBO) projects the excise tax will raise $91 billion over the next 10 years.

One-fourth of that total is projected to come from employers paying the excise tax. The other three-fourths is expected to come from increased income tax collections. This is based on the theory that employers will pare their health benefit plans to avoid the tax but then share their health savings with employees by increasing wages, which generates additional taxable income and increases income tax collections.

But it appears that neither employers nor employees predict that will occur: In an October 2015 Kaiser Family Foundation survey, 76 percent of people with employer-sponsored health insurance said they did not expect less generous health benefits to result in higher wages.

The Alliance to Fight the 40

Klein said repeal legislation faces a significant challenge in the short-term because President Barack Obama has promised to veto the bill and supporters so far lack the votes needed to override a
veto. But support for full repeal continues to gain momentum. In addition, there are some policymakers who acknowledge the flaws of the 40 percent tax, but are not yet willing to support full repeal.
They do, however, support other “legislative fixes” including:

Klein said the IRS is aware of the complexity of this reporting and is expected to enforce reporting rules with a “light touch” for at least the first year and possibly two years.

A bigger long-term question is whether legislators will attempt to change tax policy on health benefits in an attempt to collect more revenue and reduce the deficit. Klein wryly quoted Shakespeare on their motivation: “Words pay no debts.”

The CBO calculates the income tax exclusion for employer contributions to medical insurance premiums and medical care will cost the U.S. government $2.6 trillion in foregone tax revenue over the next 10 years. Klein said that estimate is based on an assumption that every $1 spent on health coverage is $1 that would otherwise be paid to employees and thus subject to income tax.

Klein listed three proposals – all unsuccessful to date – that are aimed at limiting tax exclusions and increasing U.S. tax revenues:

Klein said changing the tax exclusion for health coverage could “change the nature of the bargain” between employers and employees, possibly even making employer-based coverage unappealing to
employees.

Klein offered a long-term strategic vision for employers and described three specific legislative proposals that could help facilitate that vision or improve the ACA.

Of course, the 2016 presidential race also has the potential to significantly impact health policy. Klein summed up those prospects with another quote from the Bard of Avalon: “If you have tears, prepare to shed them now.”