ACA Changes: What the AHCA Could Mean to Employers and Health Care Coverage to Americans

What will happen to employer-sponsored health care coverage and benefits if the American Health Care Act (AHCA) becomes law?

Attorney John Barlament, partner at Quarles & Brady, weighed in on the murky scenarios created by the AHCA bill introduced by Republicans in the U.S. House of Representatives. Over 140 employers, agents and industry professionals attended The Alliance’s March 14 Learning Circle event in Madison, Rockford or via webinar.

Barlament provided background for the AHCA, discussed how lawmakers propose to change the Affordable Care Act (ACA) and projected what the impact of the proposed AHCA might mean for employers.

AHCA Predictions by the CBO

Initial Attempts to Change the ACA 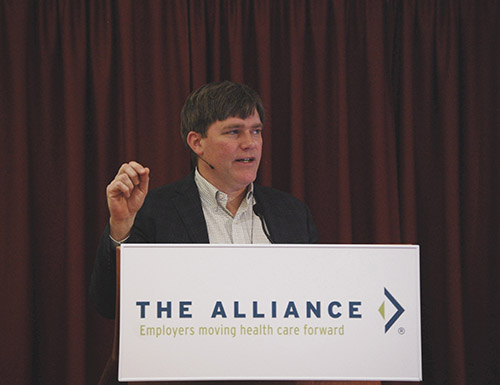 There are common elements in several Republican proposals that sought to repeal or modify the ACA but failed to become law. Barlament said pieces of them have been used to construct the current AHCA bill.

Like the AHCA, some of the proposed bills sought to modify or repeal the Employer Shared Responsibility (ESR) rule by reducing employer financial penalties to zero. Also known as “pay or play,” ESR rules require employers with 50 or more employees to offer health benefits that meet ACA standards or pay a sizable financial penalty.

Again like the AHCA, many of the proposed bills aimed to expand taxpayers’ ability to use Health Savings Accounts (HSAs) to fund out-of-pocket costs in high-deductible health plans (HDHPs).

HSAs work well for taxpayers in middle income or higher tax brackets. “But pricing transparency is still a concern,” said Barlament. If you don’t know how much that medical procedure might cost, you won’t know how much you’ll need to save in your HSA.

Alliance members: Compare the costs of over 50 tests, surgeries and office visits when you log in with Find a Doctor. Watch the Tutorial Video.

A cap on the employee tax exclusion for employer-sponsored coverage has also been proposed by some health care bills in place of the ACA’s “Cadillac Tax.” The American Benefits Council and other employer groups oppose both the Cadillac Tax and any proposed cap on the tax exclusion. (The Alliance is a member of the American Benefits Council on behalf of member companies.)

President Trump has signed three health care-related executive orders since taking office in January 2017. To date, Barlament said they have had little to no impact on employers. In the future, executive orders could expedite judicial or regulatory action.

Barlament said Trump’s support for the AHCA to date has been “tepid.”

“Where does that leave us?” Barlament asked. He noted that Republicans will use a three-step process to repeal and replace the ACA.

A Three-Step Process to Change

This road map paves a partial path to how Republicans may enact ACA repeal and reform. But questions are still on the minds of many employers, such as:

Republicans project that the AHCA would reduce the Federal deficit by $337 billion within 10 years.

Barlament said the proposed AHCA could impact employers by:

What Remains of the ACA?

“The majority of the ACA will stay in place,” Barlament said of the proposed AHCA.

Here’s what could stay from the ACA:

AHCA Impact on the Average American

Many provisions of the AHCA deal with non-employer-specific items. “Ninety percent of the country would not see any tax cuts,” said Barlament. “However, this bill favors the wealthy.”

The middle and upper classes could see additional health care tax credits with the AHCA as opposed to the current ACA parameters.

Meanwhile Americans with lower incomes, especially those over age 60, would see a significant increase in health care premiums. Barlament shared the CBO’s example of the AHCA’s impact on that age group.

The AHCA would not allow insurers to exclude individuals for pre-existing conditions. However, individuals would be charged a 30-percent surcharge if they had a gap in health care coverage of 63 or more days.

The Kaiser Family Foundation has explored the impact of how tax credits under the ACA and AHCA might differ in this interactive map by county.

Other Changes on the Horizon

While legislators debate the future of the AHCA, Barlament said there are other changes employers should pay attention to right now.

Barlament reminded employers that as of April 1, 2017 there is a new SBC template. Whether the AHCA passes or not, employers will be required to use this new template.

“It’s in Word format and I’d advise that you start fresh with this new template and not try to modify your existing SBC,” said Barlament.

That means there’s plenty for employers to monitor as they wait to see how legislators deal with the future of health reform.

Previously, Lisa worked at a founding member of The Alliance for 17 years as a marketing specialist. Lisa received her master’s degree from the University of Wisconsin-Whitewater in Communications with an emphasis in Corporate Communications.
Read Lisa's latest posts.