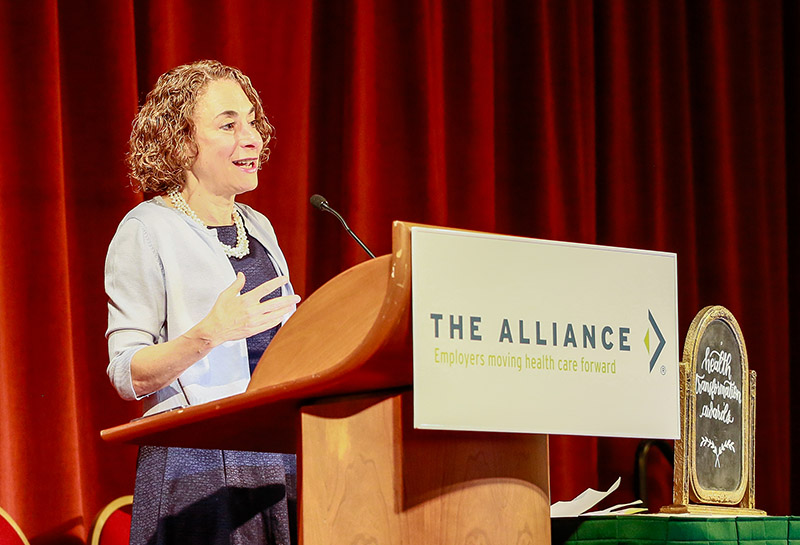 Dr. Elisabeth Rosenthal believes Americans are trapped into “Paying Till It Hurts” for health care because of health system dysfunction.

“Our health care system really isn’t working well for anyone,” Rosenthal said at The Alliance Annual Seminar on May 17, 2008 at the Monona Terrace in Madison. “Unless you’re in the 1 percent, you could be one medical problem away from financial disaster.”

Rosenthal is the author of the best-selling book, An American Sickness: How Healthcare Became Big Business and How You Can Take It Back, and the editor-in-chief at Kaiser Health News.

‘Trapped’ by the Health System Dysfunction

When Rosenthal worked in Europe as a reporter for the New York Times, two jogging accidents opened her eyes to the reasonable cost of quality care outside the United States. In Stockholm, she paid $400 for treatment for a broken wrist. In Rome, she paid $140 to get 10 stitches to close a cut on her forehead.

After she returned to America, she had a screening colonoscopy at Memorial Sloan Kettering Cancer Center. Nationwide, the average cost of a colonoscopy varies from $2,116 to more than $9,000. Sloan Kettering charged Rosenthal $12,000 because the test was done in an operating room, which Rosenthal knew was unnecessary from her training as a physician. Her insurance company paid $9,000 and she owed nothing out-of-pocket.

“So I guess I should have been happy,” Rosenthal said. “But I wasn’t because any company that is paying $9,000 for a colonoscopy is overpaying and is not going to be able to do the things you want to do for your employees.”

“Paying Till It Hurts” used social media to collect similar stories about overpaying for health care.  More than 20,000 consumers shared stories with the New York Times during the two-year series.

“Social media has given me a new insight into what’s going on in our health system,” Rosenthal said. Readers’ comments are “really a litany of the way our health care system traps people.”

Rosenthal is still involved in sharing readers’ stories at Kaiser Health News, which works with NPR’s Shots blog to analyze the “Bill of the Month.”

Moving Health to the Front Burner

Rosenthal said health care gradually changed to put business considerations – “What makes financial sense” — ahead of health care concerns. Decisions are based on profits instead of what will heal people, as shown by her “Economic Rules of the Dysfunctional Medical Marketplace.” Rosenthal said it’s time to reverse that.

“Patients, doctors, employers have reached the tipping point but feel they lack the power to make good, rational choices and lack an outlet to make systematic change,” Rosenthal said.

Rosenthal cited Health Transformation Award winners for doing “the things that we all have to do on a larger scale.” Other payers have shown that reference-based pricing can change the market by setting a fair price for a specific procedure based on current market charges.

These tactics must be tried on a bigger scale, Rosenthal said.

Rosenthal gave examples of how economic motives help push up the cost of health care.

Rosenthal urged employers to tell patients about how to get better value for their health care dollars.

“Part of wellness for employees has got to be education,” Rosenthal said. When patients learn that hospital-based centers for lab tests and MRI scans are typically the most expensive site for care, for example, they can ask their doctors to refer them to other sources.

Speaking up and asking doctors about the cost of services is vital. Some doctors may say they don’t know the cost, but Rosenthal argues it’s time to use medical education to teach them how to find out. She urged employers and patients to get involved in efforts to pass laws to protect patients’ rights, especially at the state level.

“A lot of these things exist because they occur in the dark.”