Deductibles are increasing; employees are being asked to pay more; and employers’ health plan costs are still rising faster than the consumer price index (CPI).

Rae focused on the rising costs impact on workers, employers and employer-sponsored health plans, which cover 57 percent of non-elderly Americans. 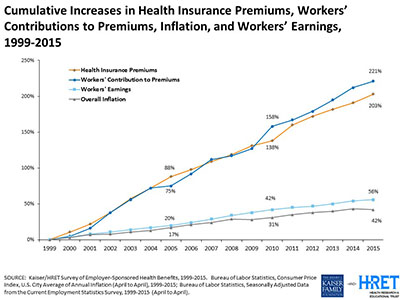 Rae said there are “really important differences” in how employers of different sizes tend to approach workers’ contributions to health premium costs.

A large majority of workers, or 81 percent, are now paying a deductible. That compares to 55 percent in 2006.

The average deductible for all workers – a group that includes people with coverage that has no deductible – is now over $1,000. Pare that group to covered employees who already are enrolled in a plan with a deductible, and the average amount rises to $1,318.

While $1,000 may seem like a high deductible, it’s still below the deductibles for many federal exchange plans. The average deductible for plans with a combined medical and prescription drug benefit is $5,328 for a bronze plan; $2,556 for a silver plan; $845 for a gold plan; and $69 for a platinum plan.

Focusing on Self-Funding to Help with Rising Costs

Rae also honed in on the role of self-funding in providing coverage to employees with four charts created for The Alliance event. 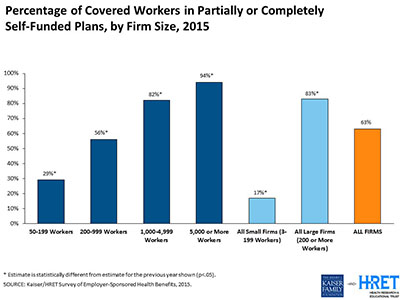 Those larger firms are the least likely to purchase stop-loss insurance, possibly because they are better able to bear any losses themselves. Overall, 60 percent of workers were covered by a self-funded plan that purchased stop-loss insurance in 2015.

Rising health costs increase the likelihood that employers’ health plans will trigger the 40 percent excise tax. This non-deductible tax is 40 percent of the value of employer-sponsored health coverage that exceeds certain benefit thresholds – initially, $10,200 for self-only coverage and $27,500 for family coverage in 2018.

Large employers are already anticipating the excise tax. More than half of these firms, or 53 percent, have conducted an analysis to see if their plan will trigger the tax. Thirteen percent have made changes to the plan to avoid exceeding limits; 8 percent have switched to a lower-cost plan and 6 percent have taken other measures.

In contrast, 71 percent of small firms have yet to act. Only 17 percent have conducted an analysis, 7 percent have made plan changes and 8 percent have switched to a lower-cost plan.

That is likely to change as the excise tax draws nearer and more health plans are at risk of triggering the tax.

“Obviously, health costs are growing faster than anything else,” Rae said. “So obviously, over time, more and more employers will be subject to the excise tax.”

Among firms who have made plan changes, large firms have taken various steps to avoid the excise tax including increasing cost sharing, a step taken by 64 percent; reducing the scope of covered services, 10 percent; moving to account-based plans such as health savings accounts or health reimbursement accounts, 34 percent; increasing incentives for workers to use less-costly health care providers. 18 percent; and considering offering insurance through a private exchange, 16 percent.

Meanwhile, cost pressures on employers are still in place, which means workers’ share of costs might continue to increase. U.S. health care spending per capita has remained at low rates in recent years, including the 4.4 percent increase in 2015, but Rae noted those rates are expected to rise faster in the years ahead.